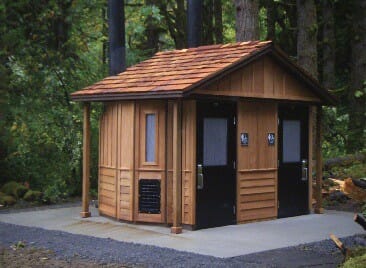 Every once in a while I used to see a restroom labeled handicapped and noticed that it was a single room, lockable from the inside that simply contains a toilet and a sink. In many cases a single user restroom is the best option for a handicapped person. They’re far more roomy and private compared to multi-user handicapped accessible stalls. It’s the best set-up for those who might need more assistance.

A few years ago, I started receiving a lot of requests for single user rooms for entire facilities with and without handicap signage. These single user rooms have quickly become the preferred design standard for many cities across the United States.

One purchasing agent with a California city told me that her son had reached that awkward age where she could no longer take him with her into the women’s restroom, but in their city she refused to let him go into a multi-user room alone where there had been incidents of child predators in the restroom facilities. It’s a sad state of affairs that we have to think about such issues in designing our park and recreation facilities, but that is the reality we live in today. She explained that with a single-user room, she can enter the room, ensure it is vacant and safe, then allow her son to enter, lock the door, and enjoy complete privacy, while his mother waits outside the door knowing he is safe.

Another customer asked for single-user restrooms for their sports park. He explained that in their sports park one day may be all boy’s baseball and the next day could be girl’s softball, yet both days they can offer six rooms for either
group. When there are games, the facilities are available to both men and women which solved the problem of long lines for the women while men’s restrooms remained empty because they were quicker through the lines. Now all rooms could be utilized to their maximum capacity. He also stated, “We can close a room at a time for cleaning and not have a huge impact on availability.”

Not long ago an old family friend explained the difficulty he experienced after his wife developed Alzheimers. He often has to call on strangers to help bring his wife out of a women’s restroom. With single-user rooms, he could escort his wife, help her out, and then leave in an uneventful manner.

Picture a mother with a four year old, a toddler, and a baby in a stroller. With a single user room she can simply enter with all three children, lock the door, and be in complete control and peace of mind. She can attend to the needs of all three of her children and not worry about where they are or where they are going.

It seems the benefits of single-user rooms are endless and you would wonder why anyone would ever use anything else. But once in a while I hear clients say, I can’t do that. I would have to put a sign up that says, “Hotel”. It is obviously not the perfect match for every community or park, but the benefits and applications are boundless, and really should be considered when planning for any park or campground restroom project.